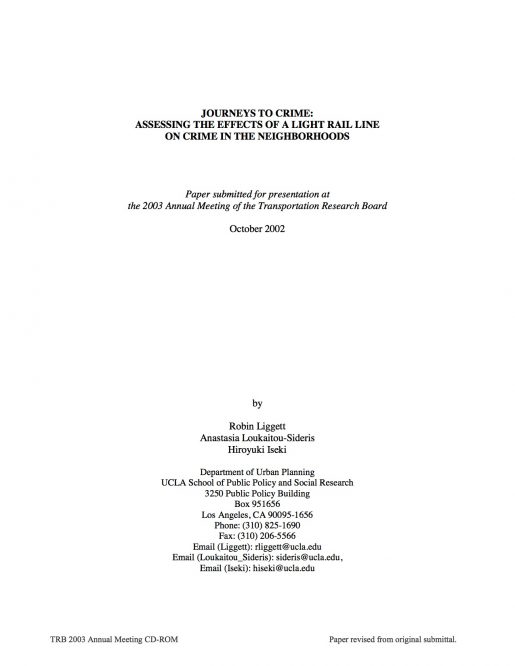 Journeys to Crime: Assessing the Effects of a Light Rail Line on Crime in the Neighborhoods

The implementation of new transit lines is some times dogged by concerns that such lines may increase crime rates in station neighborhoods. Affluent communities have often complained that transit lines transport crime to the suburbs. This study focuses on the Green Line transit system in Los Angeles and examines its effects on crime in the adjacent areas. The Green Line light rail system passes through some high-crime inner city neighborhoods and terminates at its western end in affluent suburban communities. The study examines neighborhood level and municipalitywide crime trends for five years before and five years after the inception of the line. A piecewise regression model is developed to evaluate the impact of the opening of the line in the station neighborhoods. GIS analysis is also utilized to identify spatial shifts in crime hot spots for the municipalities abutting the Green Line. At the end, the study establishes that the transit line has not had significant impacts on crime trends or crime dislocation in the station neighborhoods, and has not transported crime from the inner city to the suburbs.