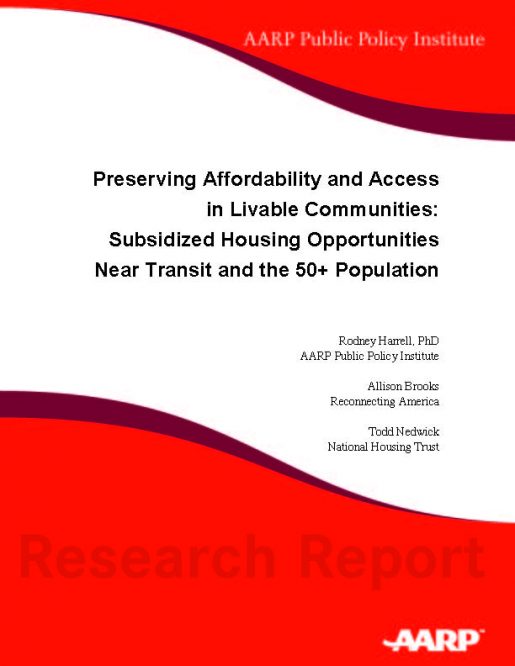 Preserving Affordability and Access in Livable Communities: Subsidized Housing Opportunities Near Transit and the 50+ Population

In the next five years as many as 160,000 renters in 20 metro areas could lose their affordable apartments near transit because the contracts on their privately-owned HUD-subsidized rental units are due to expire. The renewed popularity of urban living means that properties in walkable neighborhoods near transit have increased in value, and that property owners are likely to opt out of the HUD program and convert the housing from affordable to market rate.

These are the results of a recent study by AARP, Reconnecting America and the National Housing Trust, which released the results in Washington, DC, on Sept. 30. The study found that there are more than 250,000 privately owned HUD-subsidized units within a half-mile of existing or proposed rail stations in the 20 regions, and that contracts on two-thirds of these units are due to expire by the end of 2014. Almost a quarter of the units are designated for seniors.

The report recommends that Congress appropriate sufficient federal funding to renew all Section 8 contracts, and increase funding for the Section 202 housing program. The report also recommends that state and local governments allocate funds to preserve affordable housing in transit-rich areas, including the development of affordable housing acquisition funds for properties near transit, and that governments develop “early warning systems” for properties with expiring federal subsidies.